One of the core elements of my Nice Bike principle is to acknowledge – which means that you must be present to win. I encourage my audience members to be present with their family, especially their parents. Ask your parents about their life because once they are gone, the library is closed.

I recently spoke at the National Speakers Association sharing my Nice Bike message. One of the audience members, Deb Shapiro sent me a note on the power of being present in the lives of her own parents. She writes:

I drove back from DC with my parents to their home in Brockton, Massachusetts. A 10-hour ride. Any other day, I would have likely been sitting in the back seat with my computer open and my ears closed. But on this day, per your suggestion, I decided to pour over every story I could in my parents “library” before it would be closed indefinitely.

For 10 hours straight, I was transported from my parents 2004 Toyota Camry to magical lands. The first was a hot and humid Korea as my dad recounted what life was like for him after being drafted into the Army. He told both the heart-warming and heart-wrenching details of his first love, Mona, a Korean woman he had to leave behind when returning back to the states. He shared of a time foreign to my world; a time when he was unable to enjoy the simple pleasure of seeing a movie with his closest friend — solely because of the color of his skin. 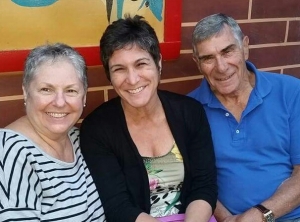 I got to travel to my dad’s first home in Upstate, New York. Much to my surprise, I discovered that he was a late bloomer with the women. This came as a complete shock as I already knew that my dad had been voted “Most Popular” and “Wittiest” in high school. How could he not be reeling in the ladies as well?  Apparently, all of the popularity couldn’t wash away the embarrassment of his impoverished living conditions at home.

My mom shared how proud she was to be “Al Shapiro’s girlfriend, Al Shapiro’s fiancé and Al Shapiro’s wife”. She gushed as she talked of how it felt to hold me in her arms that very first time, an event that may not have occurred had it not been for the two miscarriages she had prior to my birth.  And after much deliberation, mom shyly admitted her only regret. “I wish I had talked to my mother like we are doing today. She was a tough woman, quite domineering. But I never really knew what life was like for her… because I never asked. And now it is too late.”

For 10 hours we talked of their most cherished moments, biggest regrets, wishes unfulfilled, life-stopping insecurities and proudest moments.

My dad, who can typically drive for only two hours at a clip, drove the entire way home. He was as animated as I had seen him in quite some time.  And, if I took too long reflecting on the conversation, my mom would blurt out, “Ask me another question. Ask me another question!” It was magical.

Thank you for the most precious gift you gave to me: my parents. While I have always had an incredibly close relationship with my entire family, this drive allowed me to connect with them on a completely different level, on a human level.

Suffice it to say, I was “present” with my parents… and I WON!