The Power of Acknowledgment (or Check This Out, Please!)

The following story came from someone who heard me speak and then used the power of “Nice Bike” to change his circumstances. I think you’ll enjoy it as much as I did! Nice Bike, Chris
— Mark Scharenbroich 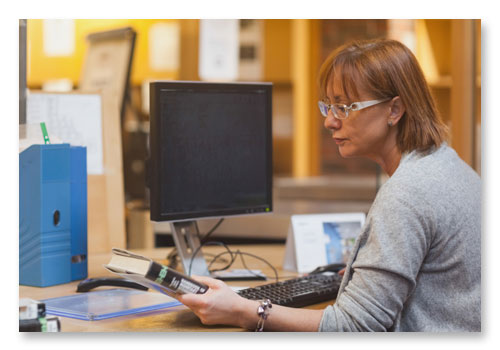 I was an attendee at an audit conference where you spoke.  As a pre-cursor to the below story, you should know that I am an obsessive mountain biking enthusiast, so I was very interested to hear you speak and how “nice bike” could relate to me and my values. I was drawn in for 75 minutes as I listened to you speak.

On Monday last week, I called my local library because they had in stock a couple of books I wanted to check out and read during an upcoming work trip to London. I placed the books on hold through the library website, and planned to pick them up that evening once I got home from work. Around 7pm, my girlfriend and I drove to the library, parked, and walked in. Just inside the front doors, there was a desk with two computer monitors at them with a sign above it that read “Personal Service”. Two library staff were behind each screen looking up information (I assume). I had my Book Hold paperwork in-hand, so I walked through the queue line to where it ended – right in front of this desk the staff were standing at. I stood there for nearly 60 seconds with my girlfriend waiting to be helped – heck, acknowledged at a minimum. Needless to say, neither staff member said anything to me. No “hi there, we’ll be with you in just a moment,” or “I’m helping another customer, we’ll be right with you,” or even “hello, how can I help you”. There was nothing.

The computer screens were about chest height, so it was very obvious both staff members were ignoring me and waiting for the other one to acknowledge me first. They went about staring into their digital screens instead of helping a customer and speaking to a human being. Coming from my years in retail banking, I’ve seen this mentality before, where if you don’t acknowledge a customer maybe they’ll avoid you and someone else will help them. Being that customer on Monday, I was more than disappointed, but not surprised. I turned to my girlfriend and said, “I wonder how long I can stand here before they’ll even bother to look up or acknowledge that I exist?” My girlfriend shrugged, so we proceeded to test the staff members (along with our patience). We stood there for 79 additional seconds before another staff member walked over and asked if she could help with anything.

After we left the library, my girlfriend and I talked about what had just happened in the library, and how we think it translates into a larger social norm among people today of “digital before social”. I mentioned how “at the conference I attended, a speaker talked about that very thing, how digital form and technology are eroding the ability to connect with people and be a human.” I said to my girlfriend, “people just don’t know how to connect anymore; they’d rather send 25 text messages instead of making a phone call, or send me 12 work emails instead of walking down the hallway to my office, or stare at the television instead of going for a walk and talk about their day. Or in this case, just continue to ignore people and act like they don’t exist because I would be an inconvenience to their mellow library task.” She nodded, and we both agreed to instill those values in our kids if/when that time should come.

But on the way home from the library (I was driving), we were driving next to an SUV with a hitch rack with a beautiful custom mountain bike (my knowledge told me this guy invested well over $6k into this bike he built). It was beautiful. So at the stop light I pulled up next to him, rolled down the window and leaned over the center console. My girlfriend got nervous for a second and asked what I was doing. The guy in the SUV looked over and I pointed at his bike, after which he rolled his window down. The brief conversation went as such:

Me: “Looks like you just went out and had some fun!”

Him: “Yeah, just went up and rode Briones for an hour or so. It was great.”

Me: “Well I can’t say I’m not a little jealous. Just wanted to say the bike looks killer, from one rider to another!”

Him: “thanks a lot, bro. That was killer, see you on the trails sometime.”

The light turned green, and we went our separate ways. As we drove down the road, my girlfriend grabbed my hand, looked over at me, gave me a smile and said, “you probably just made that guy’s day. I didn’t mean to get nervous, but I didn’t know what you were doing. I hope you continue to do that in the future so our (future) kids can see what it means to be a person. They need to see how that works.”

End of story. Thought I would share. Keep it up: I’ll be “nice bike”-ing people as much as I can.